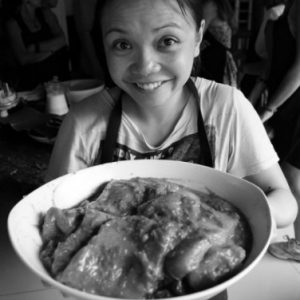 Emigrating to Australia with my parents at the age of two, growing up was still a very Filipino affair – we ate rice with every meal, and spoke Tagalog all the time, while family vacations were extensive trips back to the provinces of the Philippines to reminisce of the simple life back “home.”

Growing up with friends whose parents had emigrated from countries like Pakistan, Peru, and Croatia, I became fascinated with the history, culture, and cuisine of other countries. Coupled with an inclination toward learning more languages and a desire to break away from the expectations of what a “normal life” should be, my first big trip was a study abroad in Japan. After a solo trip to Finland, Russia, and Estonia that had me petrified (I was also deported from Russia due to a visa mix-up), I realized this was just the start of a travel love affair.

Today, I’ve been to 24 countries, speak Japanese, Russian, Spanish and Old Icelandic, savored blood sausage in Estonia, tried salty yak tea in Mongolia, and Portuguese tarts in Macau. I believe that both food and festivals are the heart of any country, so a few years ago I decided to try and go to a festival with every holiday. So far I’ve been to the snow festival (Japan), Naadam (Mongolia), Il Palio (Siena), La Tomatina (Spain), Burning Man (USA), and Junkanoo (Bahamas).

For the last eleven years, San Francisco has been home, where my day job is at a public relations agency working for a range of technology companies.