Airline crews have their own inscrutable patois that can be difficult to decipher by outsiders. Below is a list of common terms one might hear while eavesdropping on an inter-crew confab or listening to a passenger announcement (but who does that these days?).

A pilot or flight attendant who is traveling in a passenger seat and on company aircraft to a work assignment.

A crew member that spends zero time with their confreres on layovers. When they arrive at the hotel, the door is promptly slammed and the deadbolt secured.

An Air Traffic Control (ATC) assigned departure time to allow ATC to fit an aircraft into the flow of inbound traffic at busy airports, such as Boston-Logan or Philadelphia International Airport. This time is often a shorter delay of less than 10-20 minutes, but not always.

Is an ATC delay program that results in holding aircraft at the departure airport. These programs are often a result of inclement weather, such as high winds, thunderstorms, or low clouds & visibility.

Any airport that is not a major hub for the airline. Outstations are typically small, sleepy airports, but not always.

Is an airline route structure and schedule system based on having major hubs connect to smaller airport outstations. Once aircraft are at the outstation, they fly right back to the hub. The hub and spoke moniker is derived from the wheel-like appearance the structure takes when viewed on a map. An implication of this system is that it invariably results in the traveler having to traverse through a major hub on two separate flights to get to the destination. An example of this would be AGS (Augusta, GA) to ATL (Atlanta) to ERW (Newark), Atlanta being the large airline’s hub (Can you guess which one?).

Antithetical to the Hub-and-Spoke system. As the name implies, the point-to-point method of airline schedules is where an airline aircraft may not travel at all through a hub over the course of multiple days or multiple flights.

Is an acronym for “Minimum Equipment List”. When a pilot says an item is “on MEL”, that means that a particular aircraft appliance is broken but is not needed for safe flight. Examples include the coffee maker, an “in triplicate” redundant system such as an electrical generator, and countless other items.

A racetrack-shaped ground track that an aircraft follows when directed by Air Traffic Control (ATC). It is often the result of a ground stop at the destination airport and can result in a diversion if the aircraft doesn’t have enough fuel to hold for the ATC assigned holding time.

A minimum fuel quantity that, when reached, necessitates a diversion to a secondary airport called an “Alternate” airport. It is often the result of a protracted holding pattern.

Steerage passengers who, when the announcement for pre-boarding and first-class begins, crowd the boarding door and are a hindrance to the proper order of enplaning passengers. Gate hoarding is a serious faux pas and thoughtful, experienced travelers often hold these passengers in contempt.

(Also called the “Second-in-Command or colloquially, the “Copilot”)
Is a fully qualified pilot that occupies the right seat in an aircraft and shares in the duties and operation of flying. They are fully qualified so avoid asking when they will become a “real pilot”.

Although both pilots perform similar duties, the Captain is the final authority as to how the aircraft will be flown, such as in an emergency or a situation where the two pilots disagree. As a result of holding “command authority”, the Captain will ultimately be responsible for the attendant ignominious shame or Sully Sullenberger-esque glory after an aircraft accident or incident.

Is a delay time that where the crew can expect an update on the delay program from Air Traffic Control (ATC). Once reached, there will either be an extension of the EFC or the aircraft will be released for departure.

“An Area of Weather”

Usually, this terminology is heard from the flight deck crew and describes an area of thunderstorms. Thunderstorms are given a wide berth and are not to be trifled with.

“Timing Out” is the result of crews reaching the FAA's maximum permissible duty time for the day. Reaching maximum times are the result of unforeseen circumstances, such as inclement weather delays. The Federal Aviation Administration sets the maximum and takes violations very seriously. Consequently, airline crews are very careful to adhere to these limits, knowing that their career, license, and livelihood are on the line if non-compliance is discovered.

A consequence of delays the day prior, where the crew flew well beyond the planned schedule and needs a minimum quantity of rest before duty.

Is a paved aircraft parking area on the airport surface, not directly controlled by Air Traffic Control (ATC).

A passenger that is traveling on airline passes that are provided to airline employees as well as their friends and family. These tickets are on a “space available” or “standby” basis, meaning that there must be an empty seat. A Non-Rev has a lower seating priority than a paying passenger.

An airline that had established routes before route liberalization as a result of the Airline Deregulation Act of 1978. In other words, legacy airlines have a long-standing pedigree. Legacy airlines often have separate classes of service and larger route structures. Examples include Delta Air Lines and Alaska Airlines.

IROP simply means that the airline schedules did not go according to the plan, which is typically a result of weather and subsequent delays or cancellations. Irregular operations result in cancellations and crew rescheduling to perform different flights than planned.

A flight without passengers for the purpose of flying a broken but airworthy plane to a maintenance base.

A flight without passengers to move an aircraft into position for scheduled service.

A carrier that came into being after the Airline Deregulation Act of 1978. These carriers often have lower levels of service than the Legacy carriers. Examples include Southwest Airlines and Allegiant Airlines.

An agreement between two airlines that cover gaps in route structure. For example, buying a codeshare ticket on United from San Francisco to Dubai may require a plane change in JFK, where the passenger would deplane a United aircraft to fly an Emirates aircraft to Dubai since United does not service Dubai. This is a codeshare, albeit a make-believe one.

The unit measure of distance used in aircraft navigation that is 1.15 times greater than the statute mile.

Altitudes of 18,000 feet and above are referred to as Flight Levels or FL for short. For example, for 18,000 feet a pilot may refer to that altitude as “Flight Level One-Eight-Zero”.

Luggage that is checked at the gate, due to the overhead bins filling up. It may either be checked to the next gate or checked to baggage claim at the final destination, depending upon the airline and airplane.

An airline that, at least at its inception, was utilized to fly passengers from smaller, less traveled airports to the major hubs for major airlines. Regional airlines are exclusively lower-cost contractors who fly for the mainline carriers and have mainline liveries on their aircraft. Examples include Republic Airlines, Piedmont, American Eagle, and ExpressJet.

Is the air carrier that provides a higher level of service on bigger aircraft to further destinations. For example, Delta Airlines and American Airlines.

A phase of flight approximately 5 nautical miles from the runway end where the aircraft is aligned with the runway for the purpose of landing.

Permission to perform some action by ATC. An example would be a landing clearance, which is the ATC means of telling the inbound aircraft it is permissible and safe to land on a particular runway.

Refers to place or time allotted to the crew at the hotel after their duty day is complete. Often called a “layover” or “RON”.

Refers to the airport where an airplane is going to rest for the night. It can also refer to the crew overnight or layover.

Sometimes also called the “Hard Stand”, it is a slab of pavement where aircraft can be parked, but it is not considered a designated parking spot. It is a location where aircraft may go to wait for their assigned parking gate, which may be occupied. If an aircraft has a maintenance issue, it may be parked at remote parking so that a gate area may be freed for the next arriving/departing aircraft.

Preplanned routes in busy airspace that allow for the orderly flow of traffic into a country's busiest airports. Delays occur if one of these corridors gets closed, as they often do when a thunderstorm develops over them.

Occurs when a passenger is removed from an assigned seat and placed on a later flight. This occurs when the airline manages to sell more tickets than there are seats on the airplane.

A condition in which the airline has managed to sell more tickets than the capacity of the airplane.

It is fairly common that when a Captain makes an announcement, she/he assumes a minimum level of knowledge about airline operations. Because of this, it is easy to get bogged down with the jargon, which can lead to increased anxiety in the excitable passenger. Knowledge of the above terminology will go a long way in aiding to understand airlines and their operations, as well as maintaining a stoic understanding of the contretemps of delays and irregular operations. Should You Travel for Drug Rehab?

This Flight Price Will Make You Say WOW! 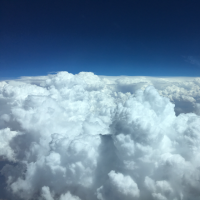 I am the resident pilot at Backpacker Travel and I'm ready to give you all the inside tips to make your flight more pleasurable and informed. So take a seat, we will be taking off soon!