Bali is one of the most popular holiday destinations for Australians – it’s not far (from Darwin it’s just over a two and a half hour flight), it’s cheap and it has a lot of the ingredients that Aussie tourists love – sun, sand, and cold beer.

While the flight isn’t long, we had a child screeching, screaming, and squealing at the top of her lungs the ENTIRE time. It was an unrelenting, piercing scream that could burst your eardrum – she didn’t even stop in between screams to take a breath. She’d be a good opera singer/horse racing announcer/auctioneer one day. The flight attendants looked harried, the passengers were grumpy and one man completely lost it, barking to change seats and making his own booming yell of frustration that shut the kid up for a nanosecond, she was completely in shock. All I can say is, luckily the flight wasn’t any longer.

Arriving in Denpasar at night, getting through customs takes a while as everyone needs to pay a visa fee at the airport equivalent to US$25 – notes only and change is given in Indonesian rupiah. The airport is similar to many others throughout South East Asia – you walk out to be greeted with warm, balmy air, a sea of people milling about outside offering transport, and a row of taxis parked next to the sidewalk.

Standing in line to catch a cab, we went to the Oasis Hotel, where we would be staying for the next few days. My first impression was that it was quite fancy – a nice lobby/dining area, an inviting pool surrounded by lights, which was then flanked by palm trees. Around this were all the rooms – there are a few blocks of rooms across two stories. Bali has rooms to suit every budget though – we had opted for a fairly schmick hotel at the lower end of the price range so that we could relax, but there are also more upmarket villas and hotels as well as budget backpacker accommodation available.

Settling into our room, flicking on the air-conditioning, and tuning into some TV, we promptly fell fast asleep.

The next morning, given that it was my first time in Bali (and Michael’s seventh), it was a case of tour guide leading the tourist for a bit of an orientation to the city. Our hotel was about a 10-minute stroll toward the beach and we walked first to the Matahari shopping complex, then to the beach, and then up the street parallel to Kuta Beach to check out Poppies Lane (there are two Poppies – Poppies 1 and Poppies 2 and they are lined on both sides with restaurants, convenience stores, and shops).

Along the way, we were accosted by the standard Balinese greetings – “Massage?”, “Transport?”, “Braid your hair?”, “Manicure?” and even (under their breath as you walk past), “Magic mushrooms?”. While a simple “no thank you” while you walk past usually suffices, there are some instances where the vendor can be rather persistent. While this pressure can become annoying after a few days before you start making faces at these guys do put it into context – this is their livelihood and they don’t get paid much – so they’re doing their utmost to earn a few bucks from any tourists that come by their way.

If you do laze on Kuta Beach, the greetings continue – ladies hoisting baskets on their heads with pineapples that they slice to resemble an upside-down popsicle that you can eat on the beach, and men walking around offering surfing lessons, water, beach mats, and wide-brimmed hats. While some ladies did sunbathe topless, this is not the norm and is culturally frowned upon – particularly awkward as well when you’re half nude and being accosted so often.

Unlike the rest of Indonesia which is predominantly Muslim, Bali’s main religion is Hindu – evidenced by the hundreds of straw-woven offerings that you will inevitably step on during your stay. These litter the streets of Bali and don’t worry if you accidentally trod on them – they are made daily and are filled with flowers, cookies, rice, and even money and cigarettes. You won’t go two meters without seeing one (or three) outside a home, shop or temple.

If you’re lucky, you may also stumble upon a beachside Hindu ceremony – during this time, the street is momentarily blocked so that a parade of people singing, beating drums, and carrying food, flowers, and other offerings could arrange this on the sand.

Similar to the rest of South East Asia, the climate is tropical, with the peak seasons being July/August. Daytime is hot, so make sure that you cover up with sunscreen etc, while the nights can be pleasantly cool, with a mild breeze. If you are the type that gets attacked by mosquitoes though, make sure that you put on a bit of insect repellent once the sunsets.

The majority of tourists by far are Australian, but there are plenty of English and European tourists visiting nowadays as well. If you want to look like the biggest tourist in Bali, be sure to do at least two of the following things: braid your hair, wear a Bintang (local beer) singlet, look like a deer stuck in headlights as you wait for ages to cross the road and take market prices at face value.

If you’re keen on nightlife, check out Jalan Legian (Legian Street) where you can find two-for-one cocktails, listen to live music, and get your groove on with DJs spinning tunes until early morning.

Here you can also find numerous ATMs (even Commonwealth Bank for Aussies), as well as money exchange places that also double as stores. Be wary though if you decide to do the latter – while the exchange rate is clearly advertised on a whiteboard outside the store, some do not include their commission in the rate.

Unfortunately, there have also been some incidents of scams where through a sleight of hand the money exchange teller will slip himself a note – or get a friend to distract you. This is easy to do when the smallest note is 1000 rupiah and the largest is 100,000, and no receipt is provided for the transaction. To be safe, try to exchange money $100 at a time (that way you can easily work out the rate) and hold on to your money until you’ve counted it all up in front of the teller(s).

Don’t let that deter you though. The Balinese people are some of the happiest, most hospitable and laid back people you will ever meet, and English is widely spoken (the language is also very phonetic in comparison to English). Bali has activities to cater to every interest – evidenced by the fact that 80 percent of all tourists to Indonesia only visit this island. Besides the beach, shopping and nightlife, there are water sports including white water rafting, scuba diving and parasailing, cycling, volcano trekking, cooking schools, and traditional dancing and batik weaving to do – and you’ve only just scratched the surface. Read our individual posts to find out more about some of these activities.

Here’s a short video montage of our time in Bali. 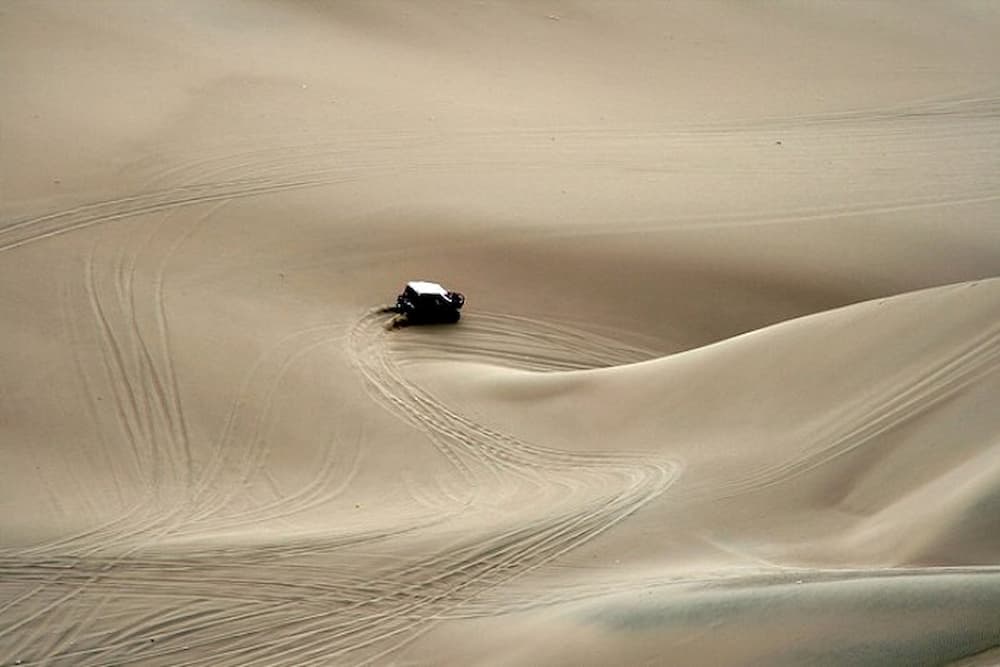 The Desert Oasis of Huacachina