A Journey to the Icelandic Highlands

After sleeping soundly in our warm Reykjavik apartment and a hearty breakfast consisting of Icelandic skyr, coffee, and rye bread with cream cheese, our group was excited for our “Landmannalaugar on Big Wheels” tour with Extreme Iceland.

The “big wheels” description lived up to its name – our super jeep looked like it belonged in a monster truck rally (all it needed to do was breathe fire). Clambering up to the vehicle (assisted by a little step ladder), we met our guide Ragnar (which means “warrior of the gods” in Norse), who has been a tour guide for over two decades. As the monster truck slithered through the narrow Reykjavik streets and finally left the capital, Ragnar mentioned that he owned a farm half an hour away from Reykjavik with horses and sheep and that he could be both “nasty and nice.” I felt like we were riding with a true Viking descendant.

The city landscape quickly gave way to the ruggedness of Iceland, where we were greeted with sweeping mountains and cliffs laden with black volcanic rocks with sheep and horses roaming around. We passed a geothermal plant shooting sulfur into the air, looking very much like it was producing the clouds in the sky (“the cloud factory”, Ragnar joked), and dozens of hot springs embedded into the hills (there are about 600 hot springs around the country). We drove past greenhouses that produce a lot of exotic fruit and vegetables – including bananas (apparently Iceland is the third biggest producer in Europe – and I checked because I found it so hard to believe – this urban myth is false).

Our first stop was Þjórsárdalur valley, home to the Hjálparfoss waterfall, meaning the Helping Falls. This name comes from when travelers arrived at this lush area and their horses could graze and recover. The waterfall has a very convenient wooden platform in front of it to check out the waterfall head-on, and is flanked by rocky but relatively easy paths to get views from different angles. It’s a very picturesque waterfall, with a parallel pair of waterfalls falling into the valley below.

Next, we headed towards the highlands, stopping briefly at Crater Lake Ljótipollur, formed in 1477 and now filled with a cobalt-blue deep lake. It literally means “ugly pond” but is far from it – even standing from a great height looking below, we were impressed with how vividly blue the lake gleamed back at us. We also stopped at Lake Frostastaðavatn, before we reached our main destination.

Lava rock is very porous and makes a great natural filter for glacial water, and we could see the difference most vividly on the drive towards Landmannalaugar, with brown water being “unfiltered” from a volcano, while the crystal blue water sidling up next to it being fit to drink. Driving past the jet black rock, it’s easy to see why NASA has used Iceland to train its astronauts – it’s an otherworldly landscape that looks like it is more appropriate for Mars than planet Earth.

We arrive at Landmannalaugar, a region forged by different and compelling geological elements, such as extensive lava fields and multi-colored rhyolite mountains. We go on a short hike and once we’re high enough, see a breathtaking display of the mountains splashed with bright hues of yellow, brown, black, and even pink and blue.

The Icelandic highlands really live up to the hype and you will most definitely want to include a trip here. Accessibility is a bit of an issue at times and the weather can change without notice so a tour is the easiest option. This was one of the main reasons we decided to go with Extreme Iceland.

Before we leave, we walked across a jetty to the site of an outdoor hot spring, where we stripped on the wooden platform to our swimming costumes, and plunged into the bath to warm our quickly shivering bodies. The hot spring’s temperature is inconsistent in places – near the source of the spring it can be boiling hot, but move an inch or two in the opposite direction and you can feel cooler water, which probably seems chillier than it is given the cool air around you while you’re sitting still in your bathing costume.

Once we were all in our monster truck ready to get back to Reykjavik, our guide Ragnar lived up to his warrior name by excitedly demonstrating what our vehicle was capable of. The road back, which was pockmarked with deep-set potholes filled with water, was the perfect opportunity for Ragnar to plunge the super jeep into every pool, splattering it with so much muddy water that we couldn’t see through the front windshield. We bumped and splashed along this road, screeching and laughing, feeling like we were on a rollercoaster ride.

Unfortunately, this wasn’t a thrill for everyone. We wound up encountering a couple who had driven their four-wheel-drive rental into a deep creek and had gotten the wheels stuck on the soft sandy ground underneath. Ragnar, ever the Viking, pulled out a rope from the boot of the car and stripped to his shorts to try and use the super jeep to rescue them. Meanwhile, we stood around shivering in the cooler air as the sun quickly started to set. Unfortunately, with nothing to tie the thick rope around, the four-wheel-drive proved to stay stuck, and the couple had to wait for help to arrive, adding to the already four or so hours that they’d been sitting in the creek.

The sunset was a beautiful mirage of pinks, purples, oranges, and blues, eventually descending us into darkness as we made our way back to the capital. But our adventure wasn’t over. As the sky turned pitch black, the Northern Lights emerged, with greens, whites, and purples vividly mingling and dancing together. A perfect conclusion to a day’s adventure. 10 Tips to Acquire Your Travel Visas for Asia 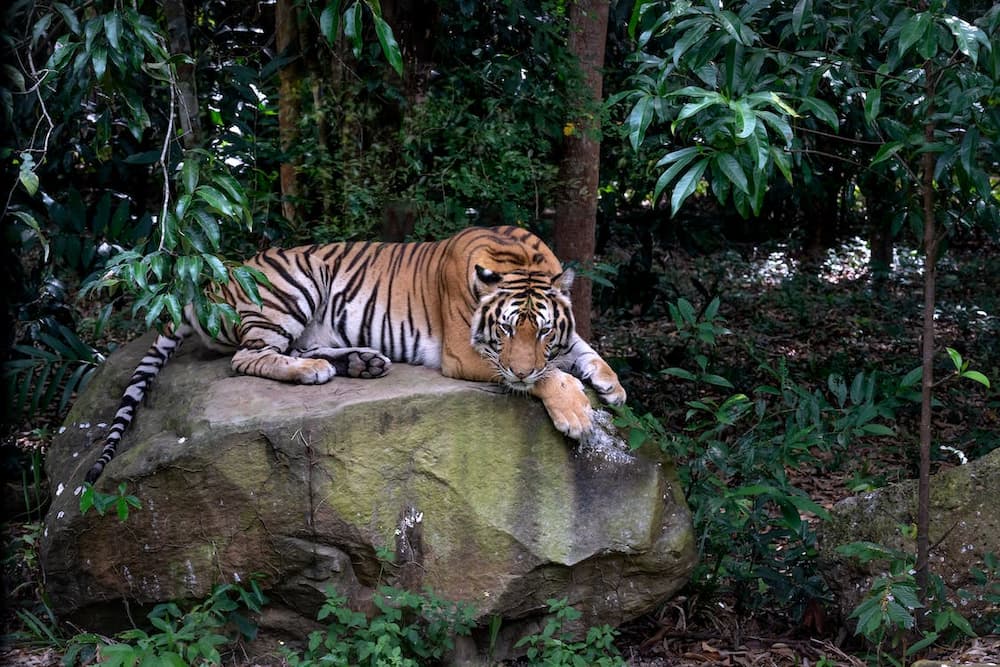 Tramping in New Zealand, the Adventure Capital of the World